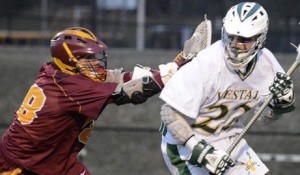 The Ithaca Lil Red finally made their season debut today against their rivals the Vestal Golden Bears.  Ithaca opened their season on the right foot hammering the Golden bears to win it all 15-8.

The Lil Red have been dying to start the season, and when I came to do so, they did not disappoint.  Ithaca was hot out of the gate and pulled ahead of the Bears 4-2.

In the remainder of the 1st half, Vest rallied and went on a streak, sinking back to back goals from Joe Eiskant, and Jake Nelson to tie the game at 4-4.  This did not stop the Lil Red.  With only four minutes left in the first half, senior attackman Eric Barr cheesed the Vestal goalie to give Ithaca  a 5-4 lead.

Ithaca only go better through the game as they increased their offensive fire power, and strengthened their defense on the crease.   Vestals’ Jake Nelson scored a hat-trick, but it was not enough to overcome Ithaca’s sound outstanding offensive performance.  Ithaca went on to win their season opener 15-8

Ithaca’s team looks very promising this year ranked in the top 25 on the DigitalSports National Lacrosse Rankings,  they look to continue their success this season against Union-Endicott April 3rd. Ithaca won’t even be given a day’s rest when they  move on to the Loyola Academy (3-0) the next day on April 4th.

Alternatively, if you do not have an account yet you can create one here.